Around 800 US citizens have been evacuated from Wuhan in the last month and placed under a mandatory 14-day federal quarantine at US military bases. Hundreds of those evacuees are finally going home.

An initial group of 166 people was released from bases in California on Tuesday, while another 63 left symptom-free on Thursday. 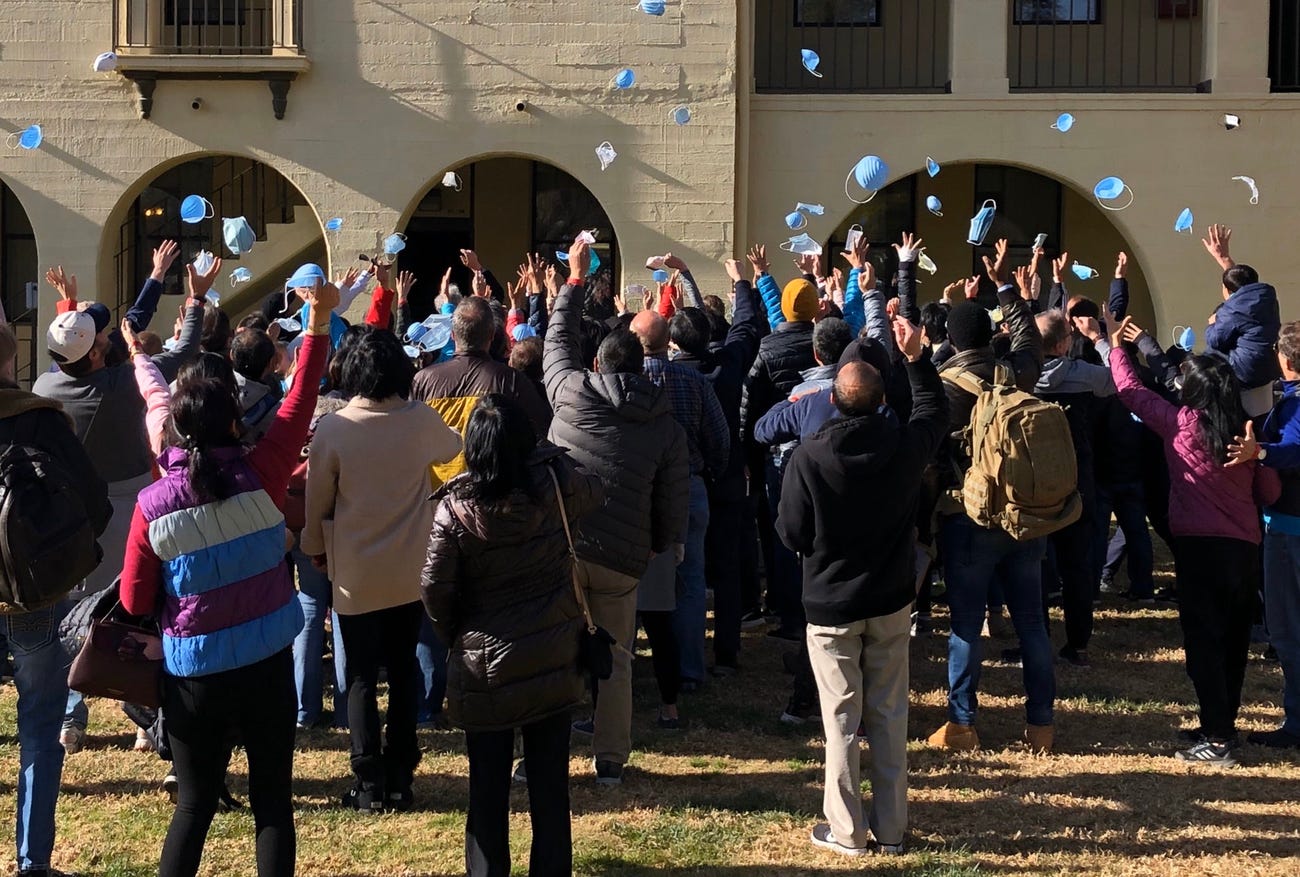 Dozens of US citizens who were evacuated from Wuhan, China, throw their face masks up in the air after their quarantine ended in Riverside, California, February 11, 2020.

“These people being released from quarantine pose no health risk to the surrounding community, or to the communities they will be returning to,” Benjamin Haynes, the deputy branch chief of the Centers for Disease Control and Prevention (CDC), said in a statement on Thursday.

On February 10, 195 evacuees left the March Air Reserve Base in Riverside, California, marking the first successful US quarantine in nearly 60 years. None of them tested positive for the virus.

“They have been watched more closely than anyone else in the United States at this point in time,” Nancy Knight, director of the Division of Global Health Protection at the CDC, said in a briefing.

The last time the US enforced large-scale quarantines was during the Spanish flu pandemic of 1918.

In total, the novel coronavirus outbreak has killed at least 2,100 people and infected more than 75,500, the vast majority of whom are in China. It has spread to 27 other countries, with 15 cases in the US.

So far, three US citizens evacuated from Wuhan tested positive for the novel coronavirus: two in California and one in Texas. They were all moved to local civilian hospitals, but probably won’t be the US’ last coronavirus patients, the CDC said.

“There will likely be additional cases in the coming days and weeks, including among other people recently returned from Wuhan,” the agency said in a statement.

In anticipation of additional cases, the US government set up quarantine centers at 15 military facilities across the country.

“Now is the time to act so that we can slow the introduction and impact of this virus in the US,” Nancy Messonnier, director of the CDC’s National Center for Immunization and Respiratory Diseases, said earlier this month.

15 military bases across the US can hold quarantined people

Five primary bases — three in California, one each in Colorado, Nebraska, and Texas — can hold up to 1,000 quarantined people. The additional locations, which were announced February 6, can house up to 20 people, but none have been used yet.

Jamie Fouss, the US consul general in Wuhan, was among those quarantined in Riverside. He said evacuees tried to live normal lives during their two-week isolation — they played trivia games, took Zumba and art classes, and sent their children to school.

About 400 additional quarantined US citizens are still waiting for the all-clear to go home, though. At the Marine Corps Air Station Miramar last week, 322 people petitioned for more stringent virus testing after after one evacuee who’d tested positive for the coronavirus was accidentally sent back to the base from the UC San Diego Medical Center.

Many of the petitioners completed their quarantines this week without any issues.

The Department of Health and Human Services is responsible for carrying out federal quarantines — the DOD is not involved in treating or observing the quarantined people.

The incubation period for the novel coronavirus — the time between exposure and the onset of symptoms — is believed to be between two and 14 days, according to the CDC.

The US and many other countries formulated their quarantine rules based on that 14-day maximum.

“It’s widely accepted that there’s a 14-day rule of thumb,” Stephen Morse, an epidemiologist at Columbia University, previously told Business Insider. “That’s how long you have to wait to go back to your daily life.”

However, recent research from a group of Chinese scientists suggested the virus’ incubation period could be as long as 24 days. If true, that could suggest the current quarantine periods are not sufficient. But the study has yet to be peer reviewed.

“The incubation period is obviously really important for us as we look to make sure that we’re releasing these people safely from quarantine,” Messonnier said on February 12. But she added, “We still think that for today, for now, 14 days is the right interval to use.”

Source: 229 US citizens were released from coronavirus quarantine this week. Here’s where the 15 military-approved quarantine camps are.