Ta’Narius “TJ” Moore, Jurnee Coleman and Kamille ‘Cupcake’ McKinney have all lost their lives to senseless acts of violence. 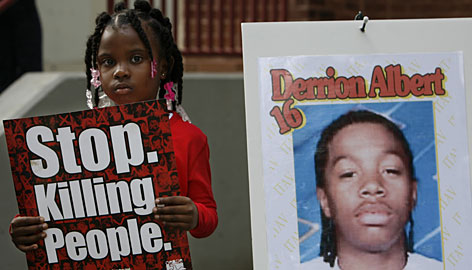 A slew of unfortunate news has been breaking out of Birmingham and it begs the question, what is going on? In less than six months, three small children under the age of six have died from senseless acts of violence and according to AL.com, the parents of those children are pleading for it to end.

Most recently, five-year-old Ta’Narius “TJ” Moore died after being struck in the head by gunfire during a heated confrontation with two female family members. The boy, who would have turned six next month and also lost his father to gun violence in 2017, was identified by Birmingham police. Police said that the two women were arguing on Saturday at around 2:30 p.m. outside of an apartment complex at 33rd Terrace North and F.L. Shuttlesworth Drive when they fired weapons at each other, the Daily Mail reports.

Police said Tanarius “TJ” Moore was shot when he became caught in the crossfire during an argument between two women family members. https://t.co/KJTHFBujUl

Officers arrived at the scene and found TJ with a gunshot wound to his head. He was rushed to Children’s of Alabama Hospital, but succumbed to his injuries. Several people have been detained in connection with the child’s killing, but police are still searching for others, some who may have been witnesses that fled.

On Oct. 12, less than two months ago, three-year-old Kamille “Cupcake” McKinney was kidnapped while attending a birthday party in Tom Brady Village. After an intense search, Kamille’s body was recovered 10 days after she was abducted. The AL.com reports that her body was discovered in a dumpster at a landfill. Patrick Stallworth and his girlfriend, Derick Irisha Brown, were charged with capital murder in Kamille’s death.

Patrick Stallworth and Derick Brown are charged with capital murder in the death of 3-year-old Kamille “Cupcake” McKinney. Both are expected to appear at the Jefferson County Courthouse on Tuesday for a preliminary hearing https://t.co/FHieMSpwMj

A third child, four-year-old Jurnee Coleman was shot and killed by a stray bullet on June 28. Michael Coleman, Jurnee’s father, and his first cousin, Raymond Shine, got into an argument outside of the Marks Village apartment complex. Shine fired shots at Coleman as he allegedly ran past the apartment where his daughter was inside, according to WBRC. One of the bullets entered the apartment, hitting Jurnee in the head. She also died from her injuries at Children’s of Alabama Hospital. Shine has been charged with murder, attempted murder and certain persons forbidden to possess a firearm.

NEW: Birmingham Police now charging Raymond Shine with murder in the death of 4 year old Jurnee Coleman, shot Saturday night while getting a drink in her kitchen pic.twitter.com/fnEIhOzU0B

The fathers of Kamille and Jurnee have extended their heartfelt condolences to TJ’s family. They have also offered support for the young boy’s parents, if needed. “I know how they feel. It hurts,” said Dominic McKinney, Kamille’s father.

Coleman said he paid close attention to Kamille’s case, and he is doing the same for TJ’s. “The day they found Cupcake, I cried my heart out,’’ Coleman said. “I don’t wish it on nobody.”

He continued, “All of it is senseless. They didn’t do anything to harm anybody or anything. They had no sins, but I guess God had a better plan for them all. I just want us black people to come together. It’s not just hurting the families of the kids; it’s hurting thousands of people. I really just want it to stop.”

Coleman shared an illustration by Louis Tolbert on Facebook Monday, which featured photos of Jurnee, Kamille and TJ, along with the caption, “Birmingham, Our Angels.”

I enjoy @RobinsonCarol‘s work, but I am looking forward to the day when she has no sad stories to tell. Three #Birmingham children 5 and under — #JurneeColeman, #KamilleMcKinney and #TJMoore have died violently this year. https://t.co/04zQXYlF0J #StopTheMadness #SaveOurChildren

Source: Black Children Are Dying From Senseless Of Violence In Birmingham