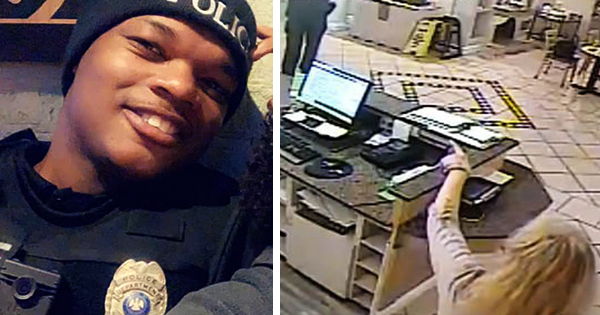 A Black police officer in Bossier City, Louisiana fatally shot a white woman who was waving scissors at him and using racial slurs.

On Friday, October 25, Officer Patrick Edmonds, Jr. was called to LaQuinta Inn in the 300 block of Preston Boulevard for a disturbance at the hotel.

Edmonds encountered an aggressive white woman, identified as Shannon Rupert of Shreveport, in the hotel’s lobby. The 45-year-old, who was a guest at the Inn, was waving scissors in her hand when Edmonds repeatedly ordered her to drop them.

Daily Mail reports Rupert was behind the hotel’s front desk on the phone when she walked from behind the counter with the scissors in her hand. Edmonds’ bodycam footage captured Rupert taunting Edmonds, saying, “You’re going to have to shoot me, n*gger!”

“Shoot me,” Rupert egged on. “You’re going to have to shoot me.”

According to KSLA-TV, Edmonds shot Rupert two times in the chest when she approached him.

Rupert was taken to Shreveport’s LSU Ochsner Hospital where she was pronounced dead.

After the shooting, Edmonds, a military veteran, was placed on administrative leave. According to Bossier Police Department’s Spokeswoman Traci Landry, Edmonds was not injured in the incident.

In a letter released on Monday, Marvin declared, “Based on all evidence reviewed, it is my firm opinion that no crime was committed by the officer as his actions constituted justifiable homicide.”

“What I am disputing is why they could not have used a taser instead of the dummy bullets because those dummy bullets will knock you down,” Peterson argued.

Peterson revealed to KSLA how her cousin struggled with a drug addiction for years.

“I know she had been into drugs really bad. I tried helping her,” Peterson said to KSLA. “I tried talking to her to see if maybe we could get her some help, a recourse.”