A prospective homebuyer found Confederate flags and a framed Ku Klux Klan application in the officer’s house in Holton, Mich. 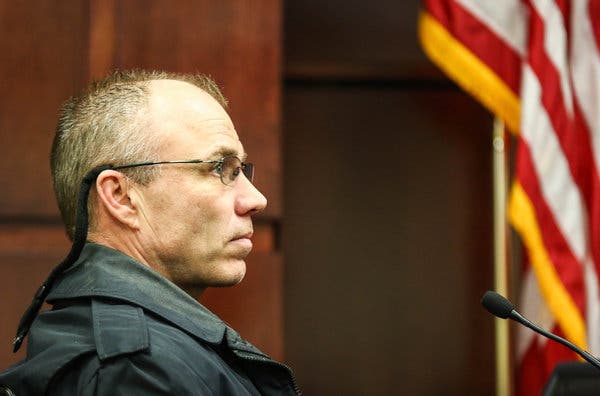 A police officer in Michigan was terminated on Thursday after a prospective homebuyer who had been touring the officer’s house posted a picture on social media of a framed Ku Klux Klan application he had seen there, spurring an internal investigation.

Frank Peterson, the city manager of Muskegon, confirmed on Friday that the officer, Charles Anderson, had been terminated, but said a report on the inquiry conducted by the Muskegon Police Department would not be released until next week.

The city announced on Aug. 8 that Officer Anderson, who is white and had been with the department for more than two decades, had been placed on administrative leave after he was found “in possession of certain items associated with a white supremacist group.” That announcement came one day after Rob Mathis, the prospective homebuyer, posted on Facebook the photo of the application, which is blank.

Although details of the investigation have not been released, Jeffrey Lewis, chief of the Police Department and Muskegon’s director of public safety, told the city’s commissioners on Aug. 27, “What you saw on social media is pretty much the way it is.”

He said that he and his wife, brother and son had toured the officer’s house in early August with a realtor.

“The first thing I noticed walking through the dining room was a Confederate flag placemat on the table,” Mr. Mathis said.

As the family walked around, he said, his wife noticed a police officer’s coat, and he saw two more Confederate flags in the garage. And when he went upstairs, he saw the framed K.K.K. application hanging on the wall. 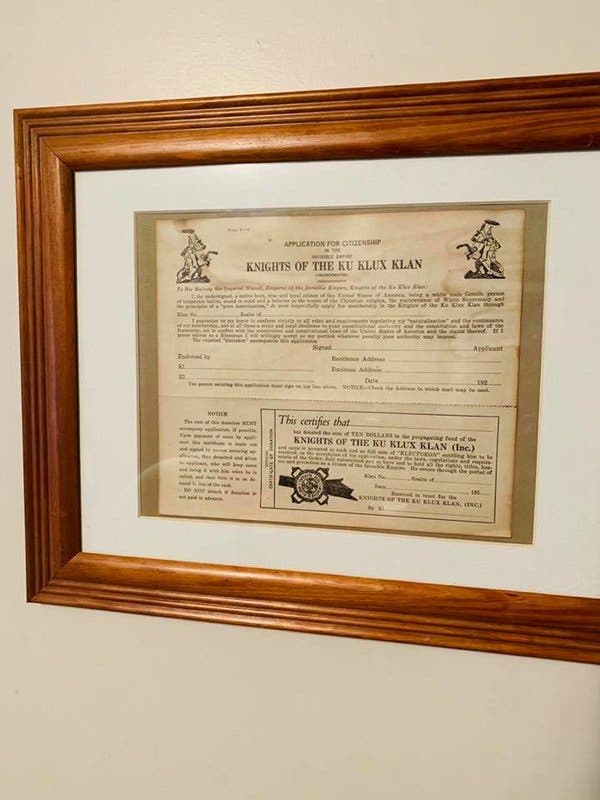 He said his wife was upset, and he told her, “We’re getting out of here.” The realtor was very apologetic, he added.

After he posted the picture of the application and the messages poured in, he said, he was “trying to explain all of this to my 12-year-old daughter.”

“It’s a bad apple, not all law enforcement,” Mr. Mathis said. “I wanted to shield her from this.”

Mr. Mathis said he reached out to Officer Anderson and Chief Lewis but never heard from them.

“I walked into the most racist home I’ve ever been in in my life,” Mr. Mathis said. “I was disgusted even being in that house.”

Ten years ago, Officer Anderson shot and killed Julius Johnson, an unarmed black man, during a foot chase. The authorities said that Mr. Johnson had repeatedly hit the officer in the head with a blunt object. The county prosecutor at the time determined that Mr. Anderson had shot in self-defense and cleared him of any wrongdoing.

D.J. Hilson, Muskegon’s current county prosecutor, told The Muskegon Chronicle that he might re-evaluate the 2009 shooting, depending on the results of the Police Department’s internal investigation.

Ebony Davis, a social justice advocate working with the Mathis family to push for law enforcement transparency, said: “We want to bridge the gap between the community and the police, because the next generation has to live in this community, a community that’s pretty diverse.”

Source: Michigan Police Officer Is Terminated After K.K.K. Application Was Found in His Home