Many were shocked at the compassion Amber Guyger received from Judge Tammy Kemp. 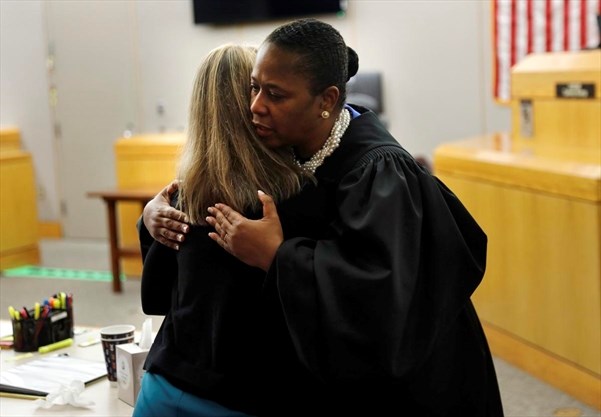 Amber Guyger received the weak sentence of 10 years for killing her neighbor Botham Jean in his own home while he was eating ice cream and watching television. But what has also disturbed people Judge Tammy Kemp giving the convicted murderer a hug and a Bible after the sentencing. It was something most people have never seen and many wondered if a Black person would get the same compassion.

According to The Washington Post, legal experts says the hug was “not only rare but inappropriate.” Kenneth Williams, a professor at the South Texas College of Law in Houston, who has 30 years in legal practice told the Post, “She has indicated an affinity or sympathy for the defendant.”

This could cause conflict if Guyger files an appeal and the case might need to go to another judge.

President and Director-Counsel of LDF (NAACP Legal Defense and Educational) Sherrilyn Ifill wrote on Twitter, “A judge is not a an average citizen. She is not the victim. She is not the prosecution (technically ‘the peopl’”). She must, especially in a case that arouses passion and conflict like this one, stand for impartial justice. She may speak words from the bench. This is too much.”

A judge is not a an average citizen. She is not the victim. She is not the prosecution (technically “the people”). She must, especially in a case that arouses passion and conflict like this one, stand for impartial justice. She may speak words from the bench. This is too much.

See the hug below and the talk Judge Kemp had with Guyger:

The jury came to a guilty verdict on Tuesday after less than 24 hours of deliberation. Those present reported tears of joy for Jean’s family while Guyger was left in agony. Cheers also reportedly erupted in the court room as well as the courthouse when the verdict was announced. Some folks could even be found flying the national flag of St. Lucia, where Jean and his family hail from.

On September 6, 2018, Guyger said she mistakingly entered Jeans apartment after a long day at work as a Dallas police officer. She says she mistook Jean for a crook and ordered him not to move. Then she shot him twice before realizing her catastrophic error. Jean was killed at 26 while watching T.V. and eating ice cream.

Many people questioned Guyger’s story because of various factor, particularly her assertion that Jean’s door was ajar. Clips posted to social media by neighbors appeared to show that apartment doors in the apartment complex shut automatically, which suggests that Guyger was lying.

Guyger’s murder trial took a full seven days, ending much faster than expected. The prosecution rested its case by Thursday, while the defense rested its case by Monday, which is when the jury deliberation started. Guyger admitted under cross-examination that she intended to kill Jean when she shot him, and the former officer also admitted that she was trained in CPR but refrained from performing the life-saving technique on Jean after she shot him. Instead, the 911 call she made along with her actions following the incident suggested that she was more concerned about saving herself rather than Jean.

Guyger also made violent jokes about Martin Luther King Jr. While she was working at an MLK Parade she was having a text conversation with another person identified as Blevins, who typed, “When does this end?”

Guyger replied, “When MLK is dead.”

The prosecution brought up these text messages before Guyger’s sentencing.

Guyger was put in custody immediately. See her most recent mugshot below:

BREAKING: Here is Amber Guyger’s newest mugshot after she was convicted of murdering Botham Jean. She faces five to 99 years in prison. https://t.co/inNqZZw7BK pic.twitter.com/1HVW5XVned