Outspoken Donald Trump detractor T.I. duked it out with equally outspoken Trump supporter Candace Ownes at the Revolt TV Summit in Atlanta Sept. 14, and the results were explosive. 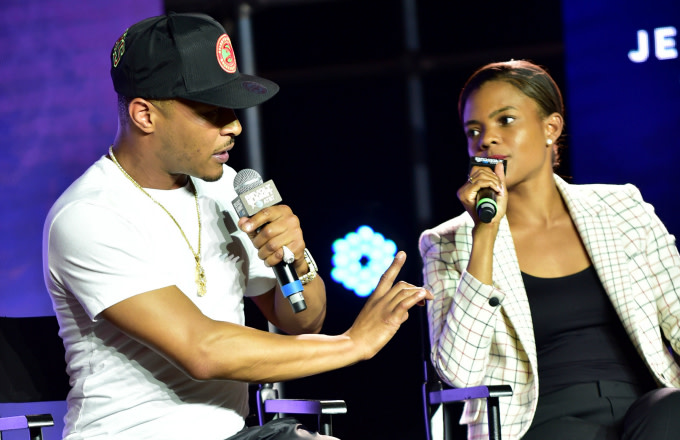 A particular portion of their spat on the “Trap the Vote: Hip Hop & Politics” panel that went viral involves Tip, whose real name is Clifford Harris, and Owens sparking tensions over whether or not the president has actually made America great again, like his 2016 campaign slogan states.

“That was Ronald Reagan’s slogan. Was it racist when Ronald Reagan had it?” Owens asks the audience, which responded with a resounding “yes.”

Owens began by stating, “I would rock a hat that said ‘Make Black America Great Again,’” to which T.I. interjected by insisting she answer his specific question about when exactly America was great.

“Here’s the thing that you guys are forgetting,” the conservative provocateur remarked. “Slavery was all over the world.”

But before she could finish her remark about where America stood in the global slave trade, Tip interrupted once more as the crowd of attendees began booing.

“If I can’t answer the question and you’re just going to boo when I say slavery was all over the world, which is a fact, why are you booing a fact?” Owens asked.

“Because you’re making light of the enslavement of people that look like us,” T.I. replies. “You can’t make light of that. That ain’t nothing you breeze over.”

After Owens continued to question Tip amid crosstalk, he hit back, “You started with some bulls–t!”

The crowd roared at the Atlanta-based rapper’s response during the panel talk, which ultimately went on for nearly an hour and 20 minutes.

Those who live-streamed the segment sounded off online.

“Which periid!??? Answer the question? Pleaseeeee”

“Candace Owens has titanium balls for even speaking here. The crowd is totally against her.”

“Protect @troubleman31 at all costs 🗣”

“The announcer, Tip and Tameka kept cutting Candice off when she was expressing her opinion.”

But the in-person sit-down, which also included Killer Mike, wasn’t the end of the chatter. As the video of T.I. and Owens’ spat made the rounds, headlines emerged largely crowning Tip as the winner of the battle. As such, Owens took to Twitter Sunday night to state her feelings on what occurred.

“I see clips circulating, indicating that I crushed @Tip or that @Tip crushed me,” tweeted the pro-Trump activist. “The truth is— yesterday was a moment for Black America. We ALL won. Thank you @Diddy for hosting such a wonderful event. I respect and love ALL of the panelists, despite our political differences.”

T.I. has not commented publicly on his interaction with Owens on the panel.