He was investigated by an inspector within HUD.

Secretary of HUD Ben Carson has been cleared of any misconduct in the $31,000 dining room set. Guess who cleared him? A HUD Inspector General, which is quite convenient. 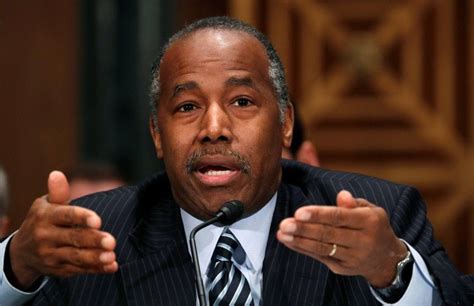 Carson was accused of violating federal appropriations law by ordering furniture worth more than $5,000 and notifying congressional appropriators. The Washington Post reports, a 14-page report read, “We found no evidence indicating that either Secretary or Mrs. Carson exerted improper influence on any departmental employee in connection with the procurement.”

The report blames the purchase on HUD staff and that Carson thought “the dollar limit applied only to his personal office — not to his entire suit.”

The agency has reportedly reviewed the process, ,

In March of 2018, Carson told the House Appropriations Committee that it was Candy Carson who purchased the $31,000 dining set for his office on the taxpayers’ dime. He said, “When I assumed the position I was told that traditionally secretaries redecorate their offices. You know, I’m not really big into decorating. If it were up to me, my office would probably look like a hospital waiting room. At any rate, I invited my wife in to come help me.” He continued, “I asked my wife also to help me with that. They showed us some catalogs. The prices were beyond what I wanted to pay and I made it clear that just didn’t seem right to me. I left it with my wife, I said ‘help choose something.’”

He threw her under the bus by saying, “I wasn’t that concerned about furniture. The next thing that I quite frankly heard about it was this $31,000 table had been bought. I said ‘What the heck is this all about?’ I investigated and I immediately had it canceled.”

Just like everyone in the Trump administration, Carson walks away unscathed.