(CNN)A gunman who wore a mask, bulletproof vest and hearing protection was killed by police within 30 seconds of opening fire on Sunday in a popular nightlife district in downtown Dayton, Ohio, authorities said.

Dayton Police Chief Richard Biehl released a timeline of the early morning shooting that left nine people dead, including the gunman’s sister.
Biehl said the shooter opened fire with a .223-caliber high-capacity rifle with 100-round drum magazines. Officers patrolling the Oregon District as the bars were closing shortly after 1 a.m. heard the gunfire and saw a large crowd running away, the police chief said. 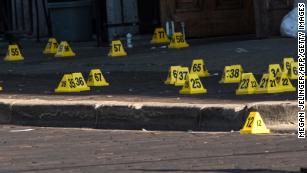 “The officers immediately advanced toward the gunfire and within approximately 20 seconds, they engaged the suspect, who was actively firing and attempting to enter a crowded liquor establishment,” the police chief said.
“The threat was neutralized at approximately 30 seconds of the suspect firing his first shot,” Biehl said.
Biehl released a frantic 911 call from the shooting as well as surveillance footage and the names of the six officers who responded to the shooting. The officers were not injured.
Twenty-seven other people were injured when Connor Betts, 24, fired dozens of shots. The motive remained unclear.
Betts, his sister and a male companion had arrived in the same vehicle but they separated at some point in the evening, the police chief said. Police are trying to determine the shooter’s whereabouts after he and his sister separated. 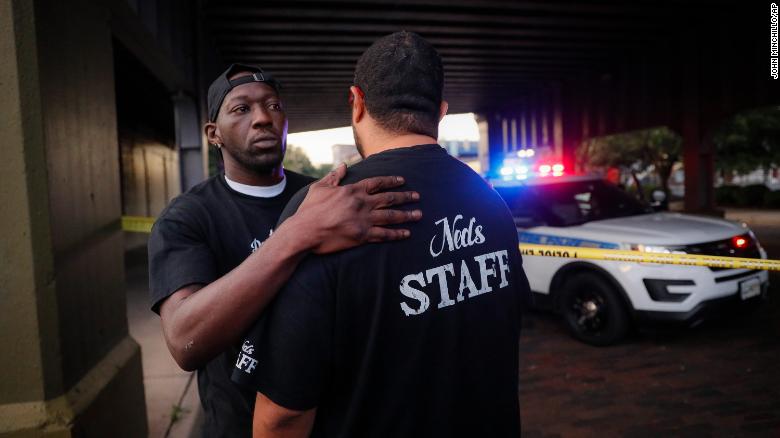 Witnesses comfort one another at the scene of a mass shooting in Dayton, Ohio.

No evidence so far of a bias crime, police say

Local and federal law enforcement sources searched Betts’ family home in Bellbrook, a suburb southeast of Dayton.
Authorities found writings linked to the shooter that show he had an interest in killing people, two federal law enforcement sources told CNN. A preliminary assessment of the writings did not indicate any racial or political motive, the sources said.
“We do not have sufficient information to answer the question everyone wants to know: ‘Why?'” Biehl said, adding that there was “no evidence [that] suggests that there is a bias motive in this crime at this time”
Matt Carper, assistant police chief, said speculating at this point would be premature.

Betts began shooting as he made his way toward a bar called Ned Peppers, said Deb Decker, public information officer for Montgomery County. 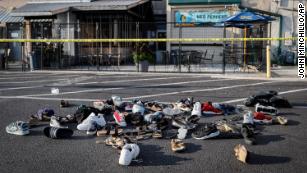 Police recovered the rifle that was used in the shooting, Biehl said. It was ordered online from Texas but transferred to the suspect at a local firearms dealer, the police chief said. Authorities also found a shotgun in the shooter’s 2007 Toyota Corolla, which was parked nearby. That weapon was acquired from a separate local firearms dealer, Biehl said.
“There’s nothing in this individual’s history or record that would have precluded him from purchasing that firearm,” Biehl said.

Bellbrook Police Chief Doug Doherty said he has been in touch with Betts’ parents, who are not ready to talk about the deaths of their two children.
“They are victims, and we’re treating that as such — them as victims,” he said, according to CNN affiliate WLWT.
Nine remained hospitalized Sunday evening, hospital officials said.

‘Bodies all over the place’

Graham Hunter, 24, of Dayton, said he and four friends arrived just as the incident was over and immediately came upon the body of the shooter outside.
“Everyone was panicking and running around,” Hunter said. “After the shooter was dead, everyone was just crying and stuff,” and he saw “bodies all over the place.”
A police officer told him and his friends to go into Ned Peppers.
He said he and his friends consider the area a safe, fun place to hang out on weekends, where many people walk around outdoors and enjoy patios at restaurants and bars.
“It’s a nice spot,” he said. “It’s where everyone goes to hang out.”
People gathered at a vigil Sunday night in nightclub district. Ten doves were released in the air, one representing the survivors and nine in honor of the victims.
“I love you Dayton,” Mayor Nan Whaley told the crowd.
Ohio Governor Mike DeWine was heckled by the crowd as he spoke. People chanted, “Do something, do something!”
“My wife, Fran and I, 26 years ago today, lost our daughter. We understand about sudden death. We understand how sad that it is,” the governor told the crowd.
The chanting could be heard again after he finished his remarks.

A deadly end to a deadly week in America

The Dayton shooting was the fourth similar incident across the country in the past week. At least 34 people were killed in total.
Saturday morning in El Paso, 20 people were killed and 26 injured when a gunman opened fire at a shopping center. Authorities are investigating a racist, anti-immigrant screed they believe was posted by the suspect.
The suspect has been identified as Patrick Crusius, a 21-year-old white man from Allen, Texas, three sources told CNN.
Tuesday in Mississippi, a shooting at a Walmart left two employees dead and a police officer wounded.
On July 28, a 19-year-old man wearing tactical gear opened fire at at the Gilroy Garlic Festival in California, killing three people, including two children.

The shooter in Dayton attended Sinclair Community College in Dayton but was not enrolled in the summer term, the school’s president said in a statement.
“A senseless tragedy occurred in our community and our thoughts are and will remain with the victims and their friends and families,” Steve Johnson, the college president, said.

A friend, Brad Howard, said Connor Betts was quiet and kept to himself.
“He was a really nice kid,” Howard told CNN affiliate WHIO. The two grew up together, he said, and knew each other for more than 20 years.
Betts’ only contact with law enforcement was minor traffic violations, Biehl, the Dayton police chief, said.
“It’s a kick in the teeth” to the Bellbrook neighborhood, Howard said.
In downtown Dayton, a memorial of flowers and candles in front of Ned Peppers illustrated the pain residents felt. The parents of Logan Turner sobbed as they posted a youthful-looking photo of their 30-year-old son in his football uniform, CNN affiliate WPXI reported.
A handwritten note on the door of the restaurant said it was closed to give employees time to process and would reopen on Monday. #DAYTONSTRONG, the note said.
Source: The Dayton shooter wore a mask, bulletproof vest and hearing protection as he opened fire, police chief says