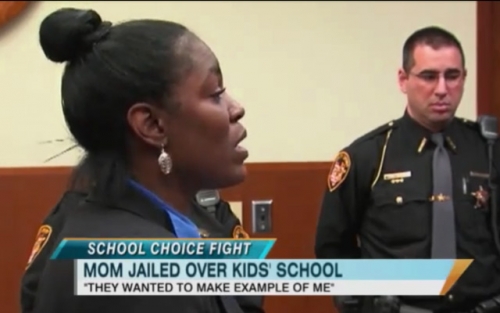 B.A.W.N (Akron, Ohio) This evening at 5:30 pm CST One World Talks with Gregg L.Greer Radio Broadcast will interview Kelley Williams-Bolar was convicted in 2011 of lying about her residency to get her daughters into a better school district.

Williams-Bolar decided to send her daughters to a highly ranked school in neighboring Copley-Fairlawn School District in Ohio.

The story made national news when Kelley Williams-Bolar attempt to provide her daughters with a better education landed her behind bars.

For the record it wasn’t even her Akron district of residence, so her children were ineligible to attend school there, even though her father lived within the district’s boundaries.

“When my home got broken into, I felt it was my duty to do something else,” Williams-Bolar said.

While her children no longer attended schools in the Copley-Fairlawn District, school officials said she was cheating because her daughters received a quality education without paying taxes to fund it.

“Those dollars need to stay home with our students,” school district officials said.

After a flurry of wrangling- Williams-Bolar was indicted of multiple felonies and convicted of falsifying her residency records. The school officials asked her to pay $30,000 in back tuition.

She was sentenced last week to 10 days in county jail and put on three years of probation.

Some limited resolution came when Ohio Governor gave a clemency and reduced those felony convictions to what he felt was more appropriate, first degree misdemeanors and in addition Williams-Bolar served just over a week in jail and was given two years probation.

This story comes in striking contrast to under the backdrop of the recent biggest college admissions scam ever prosecuted in the US by the Department of Justice (photo, above) is a harsh reminder that wealthy families can cheat their way to even greater privilege. And some say this scandal is just the tip of the iceberg.