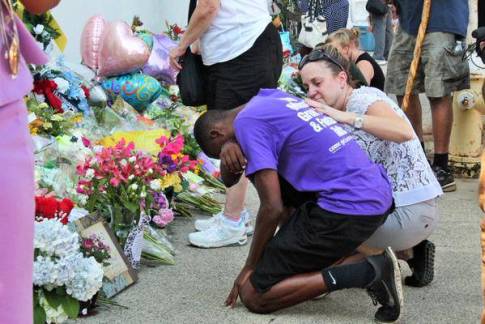 The empty souls of the Westboro Baptist Church are going to picket the funerals of the nine people murdered in a terrorist act by someone whose beliefs have some crossover with the empty shells of hate at Westboro.

They are picketing because they say God sent the shooter to kill Pastor and state Senator because he supported Secretary Hillary Clinton. They say the shootings are a lesson to stay away from Hillary Clinton fundraisers.

“We aim to picket Charleston funerals to warn the living. Dylann Roof did an evil thing but so did Clementa Pinckney!”

And if you haven’t vomited yet:

So in case anyone was wondering, there is no low for the Westboro Baptist Church. They revel in death, destruction, and despair. They take pleasure in it. They rob victims’ families of even a funeral without hate.

The bad news for them is that the survivors have already shown nothing but forgiveness, denying hate even after being terrorized and watching their friends and family be slaughtered. Grace and unity surround the grieving in Charleston. It may not seem like it now, but Westboro and the hate that drove the shooter will not achieve their goals of turning others into the subhumans that they are.

Humanity will prevail because we will all stand up and make it so.

Image: I have chosen to use a picture of unity in grief as the featured image for this post because Westboro hate is so ugly. It has to be reported on, but it doesn’t have to be elevated. Thanks to Dustin Waters of the Moultrie News for the picture of the Emanuel AME memorial, found on Twitter.