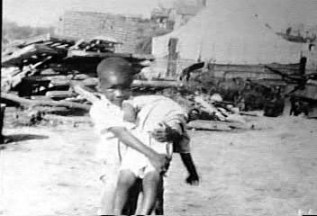 A child rescuer on June 1, 1921 – with Whites out to kill them, Blacks could rely on no one but each other.
Black Wall Street, the name fittingly given to one of the most affluent all-Black communities in America, was bombed from the air and burned to the ground by mobs of envious Whites. In a period spanning fewer than 12 hours, a once thriving Black business district in northern Tulsa lay smoldering – a model community destroyed and a major African-American economic movement resoundingly defused.

The night’s carnage left some 3,000 African Americans dead and over 600 successful businesses lost. Among these were 21 churches, 21 restaurants, 30 grocery stores and two movie theaters, plus a hospital, a bank, a post office, libraries, schools, law offices, a half dozen private airplanes and even a bus system. As could have been expected, the impetus behind it all was the infamous Ku Klux Klan, working in consort with ranking city officials and many other sympathizers. 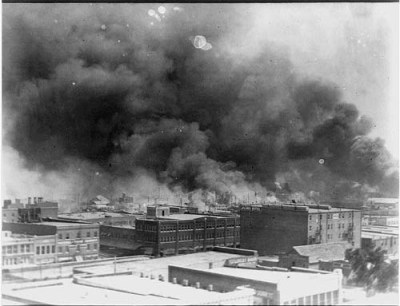 Black America’s most prosperous community, Black Wall Street in Tulsa, Oklahoma, went up in flames June 1, 1921, in the KKK-led Tulsa Race Riot. According to Wikipedia, “During the 16 hours of the assault, over 800 people were admitted to local hospitals with injuries, an estimated 10,000 were left homeless, and 35 city blocks composed of 1,256 residences were destroyed by fire caused by bombing.”

The best description of Black Wall Street, or Little Africa as it was also known, would be to compare it to a mini Beverly Hills. It was the golden door of the Black community during the early 1900s, and it proved that African Americans could create a successful infrastructure. That’s what Black Wall Street was all about.The dollar circulated 36 to 100 times, sometimes taking a year for currency to leave the community. Now a dollar leaves the Black community in 15 minutes. As for resources, there were Ph.D.s residing in Little Africa, Black attorneys and doctors. One doctor was Dr. Berry, who owned the bus system. His average income was $500 a day, hefty pocket change in 1910. 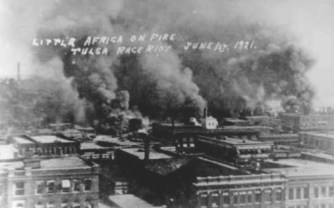 These are Black-built, Black-owned buildings that were occupied by bustling Black businesses before envious whites rioted and destroyed them.

It was a time when the entire state of Oklahoma had only two airports, yet six Blacks owned their own planes. It was a very fascinating community.The mainstay of the community was to educate every child. Nepotism was the one word they believed in. And that’s what we need to get back to. The main thoroughfare was Greenwood Avenue, and it was intersected by Archer and Pine Streets. From the first letters in each of those three names you get G.A.P. And that’s where the renowned R&B music group the GAP Band got its name. They’re from Tulsa. 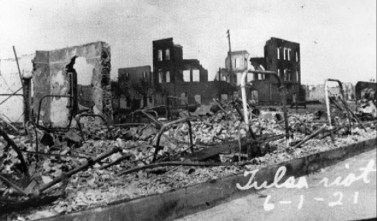 At the end of the day, June 1, 1921, this is what remained of Black Wall Street. Lost forever were over 600 successful businesses, including 21 churches, 21 restaurants, 30 grocery stores, two movie theaters, a hospital, a bank, a post office, libraries, schools, law offices, a half dozen private airplanes and a bus system.

Black Wall Street was a prime example of the typical Black community in America that did business, but it was in an unusual location. You see, at the time, Oklahoma was set aside to be a Black and Indian state. There were over 28 Black townships there. One third of the people who traveled in the terrifying “Trail of Tears” alongside the Indians between 1830 and 1842 were Black people. The citizens of this proposed Indian and Black state chose a Black governor, a treasurer from Kansas named McDade. But the Ku Klux Klan said that if he assumed office that they would kill him within 48 hours. 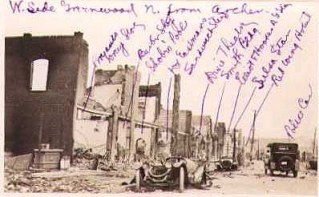 Here, the businesses that had been the economic engine of this most prosperous Black community in the U.S. are identified.

A lot of Blacks owned farmland, and many of them had gone into the oil business.The community was so tight and wealthy because they traded dollars hand to hand and because they were dependent upon one another as a result of the Jim Crow laws. It was not unusual that if a resident’s home accidentally burned down, it could be rebuilt within a few weeks by neighbors. This was the type of scenario that was going on day to day on Black Wall Street.

When Blacks intermarried into the Indian culture, some of them received their promised “40 acres and a mule” and with that came whatever oil was later found on the properties. On Black Wall Street, a lot of global business was conducted. 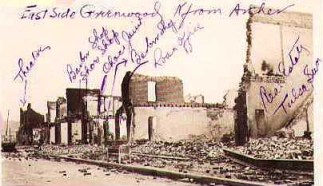 The community flourished from the early 1900s until June 1, 1921. That’s when the largest massacre of nonmilitary Americans in the history of this country took place, and it was led by the Ku Klux Klan. Imagine walking out of your front door and seeing 1,500 homes being burned. It must have been amazing.

Survivors we interviewed think that the whole thing was planned, because during the time that all of this was going on, White families with their children stood around the borders of their community and watched the massacre – the looting and everything – much in the same manner they would watch a lynching. The riots weren’t caused by anything Black or White. They were caused by jealousy. 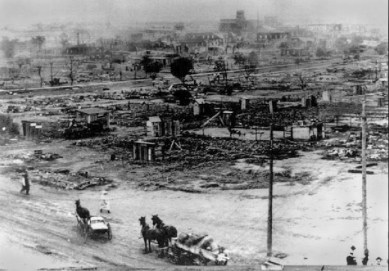 Almost 1,500 homes were also destroyed in the 35 blocks that went up in flames and over 3,000 Black residents murdered by the Ku Klux Klan-led Tulsa Race Riot.

A lot of White folks had come back from World War I and they were poor. When they looked over into the Black communities and realized that Black men who fought in the war had come home heroes, that helped trigger the destruction. It cost the Black community everything, and not a single dime of restitution – no insurance claims – has been awarded the victims to this day. Nonetheless, they rebuilt.We estimate 1,500 to 3,000 people were killed, and we know that a lot of them were buried in mass graves all around the city. Some were thrown into the river. As a matter of fact, at 21st Street and Yale Avenue, where there now stands a Sears parking lot, that corner used to be a coal mine. They threw a lot of the bodies into the shafts.

‘The gun went off, the riot was on’

[excerpts from a CNN report]

On the night of May 31,1921, mobs called for the lynching of Dick Rowland, a Black man who shined shoes, after hearing reports that on the previous day he had assaulted Sarah Page, a White woman, in the elevator she operated in a downtown building. 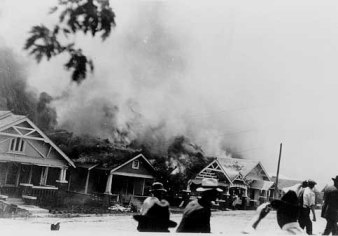 So determined were whites in Tulsa to wipe out all evidence of Blacks’ prosperity and achievement despite impossible odds, they used airplanes to firebomb Black Wall Street from the air.

A local newspaper had printed a fabricated story that Rowland tried to rape Page. In an editorial, the same newspaper said a hanging was planned for that night. As groups of both Blacks and Whites converged on the Tulsa Courthouse, a White man in the crowd confronted an armed Black man, a war veteran, who had joined with other Blacks to protect Rowland.Eddie Faye Gates, a member of the Tulsa Race Riot Commission, formed several years ago to determine exactly what happened, told CNN what happened next.

“This White man,” she said, asked the Black man, “What are you doing with this gun?” “I’m going to use it if I have to,” the Black man said, according to Gates, “and (the White man) said, ‘No, you’re not. Give it to me,’ and he tried to take it. The gun went off, the White man was dead, the riot was on.”

Truckloads of Whites set fires and shot Blacks on sight. When the smoke lifted the next day, more than 1,400 homes and businesses in Tulsa’s Greenwood District, a prosperous area known as the “Black Wall Street,” lay in ruins. Today, only a single block of the original buildings remains standing in the area. Experts now estimate that at least 3,000 died.

‘We’re in a heck of a lot of trouble’

Beulah Smith was 14 years old the night of the riot. A neighbor named Frenchie came pounding on her family’s door in a Tulsa neighborhood known as “Little Africa” that also went up in flames. 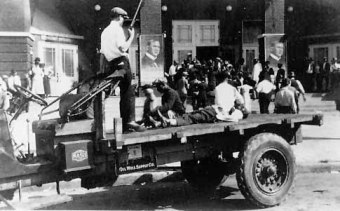 As fires set by white rioters raged, claiming all they held dear, Black men who fought back to protect their families, homes and businesses were arrested and killed. There were outnumbered 10 to one. Here, a white man with a shotgun guards the body of a Black man and several prisoners outside Tulsa’s Convention Hall.

“Get your families out of here because they’re killing Niggers uptown,” she remembers Frenchie saying. “We hid in the weeds in the hog pen,” Smith told CNN.People in a mob that came to Kenny Booker’s house asked, “Nigger, do you have a gun?” he told CNN. Booker, then a teenager, hid with his family in their attic until the home was torched. “When we got downstairs, things were burning. My sister asked me, ‘Kenny, is the world on fire?’ I said, ‘I don’t know, but we’re in a heck of a lot of trouble, baby.’”

Another riot survivor, Ruth Avery, who was 7 at the time, gives an account matched by others who told of bombs dropped from small airplanes passing overhead.

The explosive devices may have been dynamite or Molotov cocktails – gasoline-filled bottles set afire and thrown as grenades. “They’d throw it down and when it’d hit, it would burst into flames,” Avery said.

Only a single block remains of the 1,400 homes and businesses that made up the area known as Black Wall Street.

Many of the survivors mentioned bodies were stacked like cord wood, says Richard Warner of the Tulsa Historical Society. 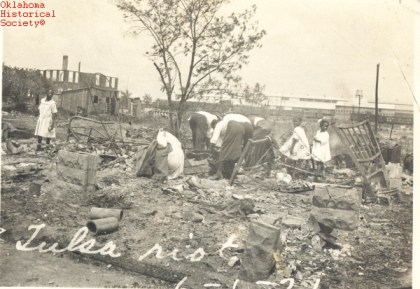 Survivors search the ruins of their homes for anything they can salvage. To this day, no insurance claims nor any restitution has been paid.

In its search for the facts, the commission has literally been trying to dig up the truth.Two headstones at Tulsa’s Oaklawn Cemetery indicate that riot victims are buried there. In an effort to determine how many, archeological experts used ground-piercing radar and other equipment to test the soil in a search for unmarked graves.

The test picked up indications that hundreds of people have been buried in an area just outside the cemetery.

Editor’s note: The Tulsa Race Riot Commission, formed in 1997 to determine exactly what happened and what should be done now, delivered its final report in 2001, calling for substantial restitution. “In June 2001,” according to Wikipedia, “the Oklahoma state legislature passed the ‘1921 Tulsa Race Riot Reconciliation Act.’ While falling short of the commission’s recommendations, it provided for more than 300 college scholarships for descendants of Greenwood residents, mandated the creation of a memorial to those who died in the riot, and called for new efforts to promote economic development in Greenwood. A documentary, “Before They Die!” has been made about the survivors and their quest for justice. It chronicles efforts in Oklahoma to gain reparations for the survivors. And watch the video “One Day in May!” at www.BeforeTheyDieMovie.com.

This story comes from the Ujamaa Network, which can be reached at mikehouse@ujamaanetwork.biz. They add these words of wisdom: “We must buy from ourselves in order to re-circulate Black dollars. If we want our dollars to return, we must spend them within our own community. 2011 will be our year if we decide it will be. Make a commitment to yourself to do as much of your spending within our community as possible.”