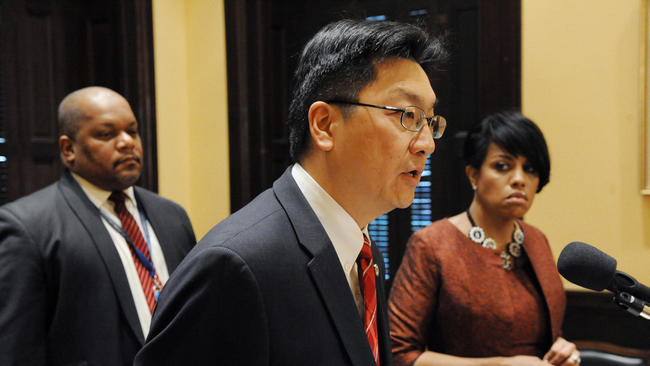 The customers — both residential and commercial users in the city and Baltimore County — together owe more than $40 million in long-unpaid bills, said Public Works director Rudy Chow. He said officials decided it was time to crack down on the growing problem of accounts that go unpaid for months or even years.

“We want to make sure all of our citizens pay their fair share,” Chow said. “When we don’t collect the necessary revenues, it causes us to raise water rates as a result. The citizens who are paying their bills are, in effect, subsidizing those who are not paying.”

The action comes after several years in which the water system has had chronic problems with billing, sending some customers wildly inflated statements. Chow said one reason the amount of unpaid bills has grown so large is that officials waited to improve billing accuracy before aggressively seeking payments.

City Council President Bernard C. “Jack” Young, who has clashed with the Rawlings-Blake administration over water bills in the past, said he supports the effort. 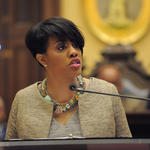 The city will move to shut off water only to customers who have unpaid bills larger than $250 dating back at least half a year. The notices will include an estimated turn-off date, likely within 10 days of receipt, Chow said.

The department will begin turning off water Wednesday. Customers who pay will have their water turned back on within 24 hours, city officials said.

“We don’t want to shut off water,” Chow said. “We want them to come in and pay.”

Chow said city workers also will make at least two phone calls to businesses, government offices and apartment complexes with overdue bills before water is cut off. The city has payment plans available for low-income residents.

Over the past two years, the problem of unpaid water bills has grown. As of April 2013, about 19,500 customers owed $29.5 million, records show. Since then, the amount owed has grown by nearly 40 percent.

In 2012, a review by The Baltimore Sun found that some big businesses, government offices and nonprofits had run up more than $10 million in unpaid water bills. Today, just 369 of the past-due accounts are commercial properties, but they make up $15 million of the missing revenue, city officials said.

Chow said the problem has grown in part because of a weak economic recovery in some Baltimore neighborhoods and because of the widespread water-billing errors in 2012 that made officials reluctant to shut off water amid accuracy concerns.

As the city has done a better job of actually reading meters — instead of estimating what was owed — accuracy has improved, Chow said. He said customers who believe they have received an erroneous bill and have asked for a review will not be sent a turn-off letter.

“We have been somewhat lenient in terms of shutting people off,” he said. “We now read 99 percent of the meters out there. We are much more confident in our numbers.”

The city has about 400,000 water customers, about half of which are in Baltimore County.

Officials did not immediately identify which accounts had the largest balances. But Chow said bankrupt RG Steel’s delinquent city water bills still account for $7 million of the uncollected funds. “We have been actively engaging them,” he said of the steel company.

Turning off water before delinquent accounts grow too large can help people stay in their homes, officials said. The city does not seek to place a property in tax sale unless the owner owes at least $500. Such tax sales can eventually lead to foreclosure proceedings if bills remain unpaid.

Henry Raymond, the city’s finance director, said a salary for the position has not been set, but said details would be finalized before the new fiscal year begins.

“It’s to try to help the financially vulnerable to avoid tax sale — by trying to reach out to them earlier and help them navigate the process if they do have issues,” Raymond said of the position.

He said enforcement of rules is key to making any system work.

“If the city’s not going to cut my water off if I’m my not paying my bill, why should I send in a check?” he asked. “I’m sure some have that mentality.”

Summers said both the city’s water lines and IT infrastructure are aging and need to be updated, but such work costs millions — underscoring the need for bills to be collected.

“You’re dealing with a very, very old system,” he said. “There’s a cost to maintain the system that’s ongoing and it doesn’t stop.”